When people hear the word Cinderella, the first thought that comes to most people’s mind is Walt Disney’s animated film that came out in 1950. We think of the optimistic Cinderella living and slaving away for her cruel step-mother Lady Tremaine and her bumbling step-sisters Anastasia and Drizella. Another thought can be the scene that has been dubbed Walt Disney’s personal favorite: when Cinderella’s tattered dress turns into the beautiful ball gown given to her by her fairy godmother. However, there are some differences between Perrault’s tale and the Disney film that were decided based off of artistic perspectives and to accomplish a modern version of the classic tale. 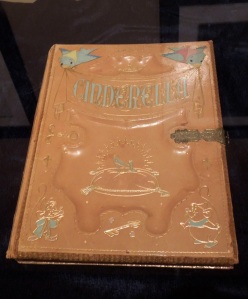 Prop from Disney’s Cinderella, from Treasures of the Walt Disney Archives at the Ronald Reagan Presidential Museum and Library

While watching the film, it is noticeable that the opening scene is a gold-gilded book titled Cinderella opening to tell adn show with images the beginning of how she became the servant girl in her own home to her step-mother. Beginning with the book is, much like the frontispiece in the 1996 version of Perrault’s tales, in reference to Perrault’s age-old book. One interesting aspect is that a woman, Betty Lou Gerson, is narrating—and “reading”—the story to the audience (IMDB). This decision is very similar to the decision that Perrault made of writing in a female narrator voice and that the frontispiece shows a woman reading to an audience via a book. It goes back to the idea that women were the ones that handed down from generation to generation oral stories which became Perrault’s written down stories.

Beyond Cinderella not having a name change, new aspects in the film that were not originally in Perrault’s version appear include the mice, bird, horse, and dog friends Cinderella has throughout the story. They help her with her chores, sew the ball gown that her step-sisters would tear up, and even become the miniature horses and the coach crew along for her pumpkin carriage. The father dies in the film possibly before her step-mother’s true colors show while in the book the father is under the step-mother’s thumb and little is known about him beyond that. However it is possible that the father could have died by being under the thumb of the step-mother and it could have been too much of a challenge to ideals of masculinity in the 1950’s. Both of these decisions were used to make the story more light-hearted (the animal friends) and to give Cinderella sympathy along with a more modernly acceptable and possible explanation of how Cinderella became the household servant (via the death of her father instead of succumbing to the wishes of the step-mother).

Cinderella makes many animal friends including birds, mice Jaq, Gus, and Perla to name a few and Bruno the dog. She is very kind, meek and gentle to her animal friends, which can be viewed as traditional feminine characteristics. The mice can be seen as gender related also as during “The Work Song” one of the female mice suggests for the mice and birds to make Cinderella a gown for the ball so she can go to it. The male mice help along, but when Jaq says he can “help with the sewing” one of the female mice says confidently to “leave the sewing to the women” and for him to help Gus cut the fabric instead. The female mice are in charge of the sewing project while the male mice mostly help with the cutting of the fabric and the bows and lifting the shoe filled with thread.

As shown, there were changes between the movie and the book, which were determined to modernize the story along with make it a good length to hold the audiences’ attention. Apparently, the decisions were not only acceptable, but well thought out as the film was a big hit when it came out and the box office release helped give Disney the money to establish his company and to build Disneyland (IMDB). Eventually the American Film Institute would rank Cinderella ninth out of the top ten in the animation category. And so Cinderella has become a classic that many children and adults alike will watch to this day.

Below I have decided to write a screenplay on the section of Perrault’s story that focuses on Cinderella’s good nature as she helps her step-sisters get ready for the Prince’s ball.

INT. A GRAND ROOM IN THE CHATEAU – CONTINUOUS

It’s two days before the ball. We see the step-sisters walk into an upstairs room that is large, grand and elaborate. Sun light shines through the large window panes onto the royal blue walls and light blue carpet. We can imagine how difficult it is for Cinderella to clean the room by herself as there are many pieces of furniture and even a looking glass whereas the rest of the room has elaborate and beautiful white trim and molding while the ceiling is quite tall for the room. The room is decorated with gold decorations including an urn and a few candelabras.

The sisters CHAT about the ball before CALLING Cinderella in to help them get ready for it. They are dressed in just their undergarments in order to not impose upon their future hairstyles.

The sisters argue over who is to sit first at the vanity first and push each other out of the way before the older step-sister wins while the younger pouts by defeat.

Where have you been? We’ve been waiting forever!

She says as she rushes in and grabs a brush and begins to comb STEP-SISTER 1’s hair.

Now, how would you like to wear your hair?

Hmm, well, the hairdresser already put my hair in double rows of curls—

I think I know exactly what to do.

We jump to near the end of STEP-SISTER 1’s hair being done and it is large, puffed and is covered in flowers, jewels and a few peacock feathers sticking out of it.

There! How is that?

STEP-SISTER 1 gets up from the vanity seat with a CREAK—which is quickly taken by STEP-SISTER 2—and walks over to the looking glass. She twirls from side to side and lastly proclaims…

Cinderebum, you always had good taste!

That is very kind of you to say.

Turning and talking to STEP-SISTER 2.

(At first nonchalantly, but becomes increasingly critical and skeptical)

Oh! However, you suggest! Just not as puffed as hers; that is too much. And no feathers. Oh! How about a ship! I love a lovely ship! It always turns out wonderful. I’m sure that won’t be too much for you, Cinderbum. Go ahead. Try.

CINDERELLA begins to comb STEP-SISTER 2’s hair when the two sisters begin to argue and pick on CINDERELLA.

(with a hint of pity)

You must hope that the Prince loves sailing. If he is in short of a boat, he can just use the one in your hair!

Well, you better hope that the Prince doesn’t have a menagerie. If he does, he might accidentally throw you in with the birds!

Besides, at least I have some kind of chance to woo the Prince’s heart. And at least I’m going to the ball.

Realizing what her sister said, STEP-SISTER 2 turns to CINDERELLA and ASKS…

(curious, but with a hint of being mean)

Cinderella, wouldn’t you like to go to the ball?

For pity, sisters—you are making fun; that kind of thing is not for me.

Quite right—how everyone would laugh, to see Cinderbum going to the ball!

With how you dress, they would confuse you with the maid that you are and make you go clean some part of the castle!

The sisters LAUGH at CINDERELLA as she finishes STEP-SISTER 2’s hair.

CINDERELLA is sad by the comments but won’t let her emotions show for the sake of keeping her step-sisters happy.

(politely and courteously, but a little bit sadly)

The sisters are trying to put make up on but are arguing over the looking-glass. They barely acknowledge her beyond a wave of STEP-SISTER 1’s hand.

CINDERELLA leaves and returns to her tower room.

EXT. A GRAND ROOM IN THE CHATEAU – CONTINUOUS